When you Google Sri Petaling, I guess that a whole list of “TOP 10 FOOD CHOICES IN SRI PETALING!” pops up. That is one of the reasons why people chose to live in this vibrant neighborhood strategically situated in the south of the city.

When it was first developed in 1981, it was known to be a rubber plantation site but as the years started to roll in, the suburb started adapting. The first residential areas started to open up in the 1980s where the housing value was only between RM40k - 60k for landed property and then it raised to RM500K - 1M in the year 2010. This is due to the population increase use to its established and mature connectivity to multiple key destinations.

In this article, we would like to elaborate on the new development trends in Sri Petaling in the year 2019. 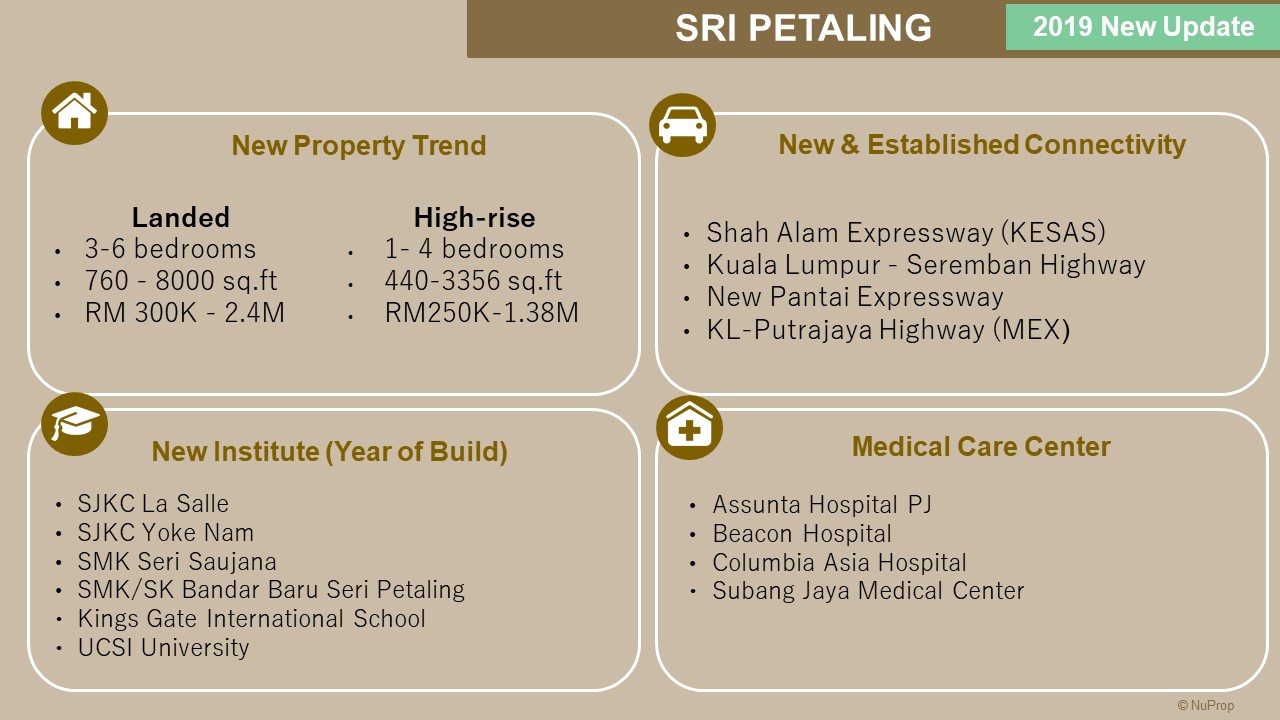 The generations have continues to live in Sri Petaling with the influence of ancestors who have lived there. The comfortability & familiarity with the area as well as the excellent connectivity to the nearby neighborhood such as Bukit Jalil, Puchong, and even KL City is the major leverages of living here.

As it began with landed residences back in the old days, Sri Petaling now withholds high rise developments such as apartments, condominiums and studio units to fit with the increasing population of the young families and working adults. Due to the land constraints, many families choose to live in high rise developments matching with the benefits that they would not have to move out from their place of familiarity. This is backing up the reason on many developers choose to build high rise homes with spacious layouts. The typical high rise layouts range from 440 sq. ft. to 3,356 sq. ft. encompassing 1-4 bedrooms. The average price demands with a starting price of RM250K.

Adding to that, most landed properties are from sub-sale development. The landed sub-sale homes in Sri Petaling range from link house to bungalows with square feet ranging from 760-8,000 sq ft with 3-6 bedrooms. As the size of the house increases, so does the price. The starting price of a landed home ranges from RM300K up until 2.4M. 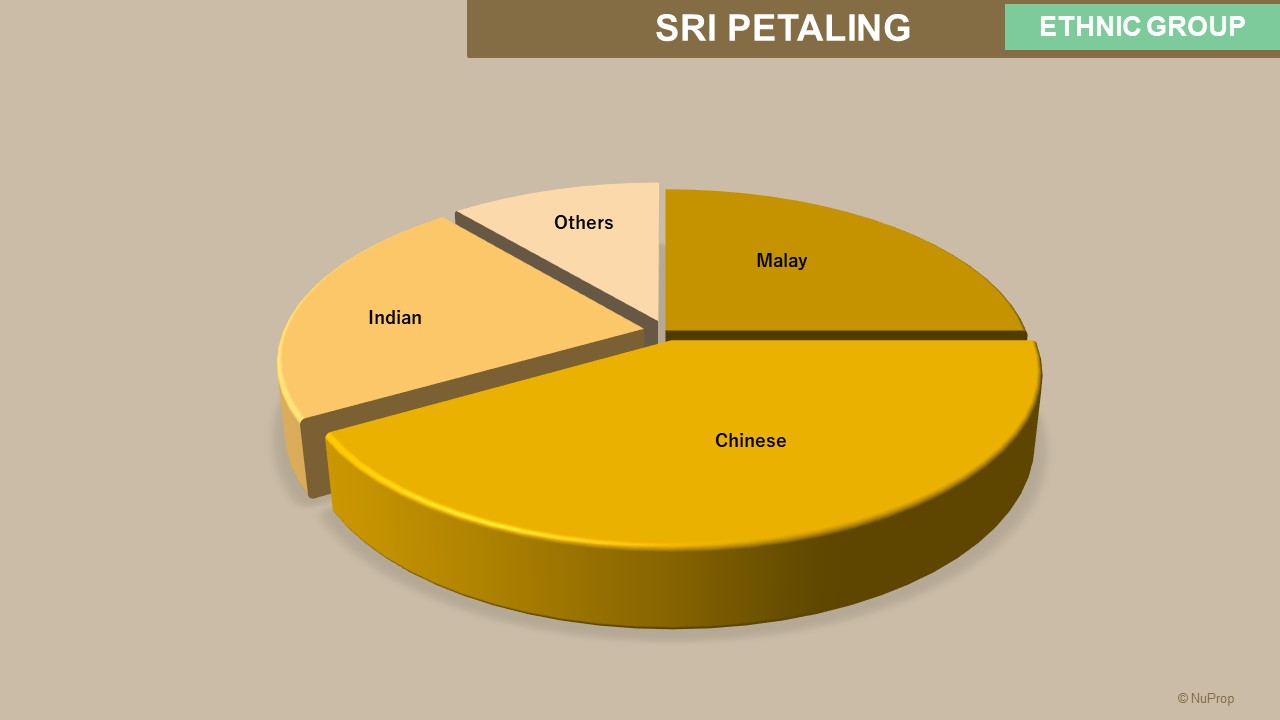 The potential buyers of properties vary in Sri Petaling, which the majority race would be Chinese as many families have been there for generations they continue to stay on. As for the rest, people are moving here to have an easily accessible living as its mature city - suburbs ensure promising networks of highways and public transportation 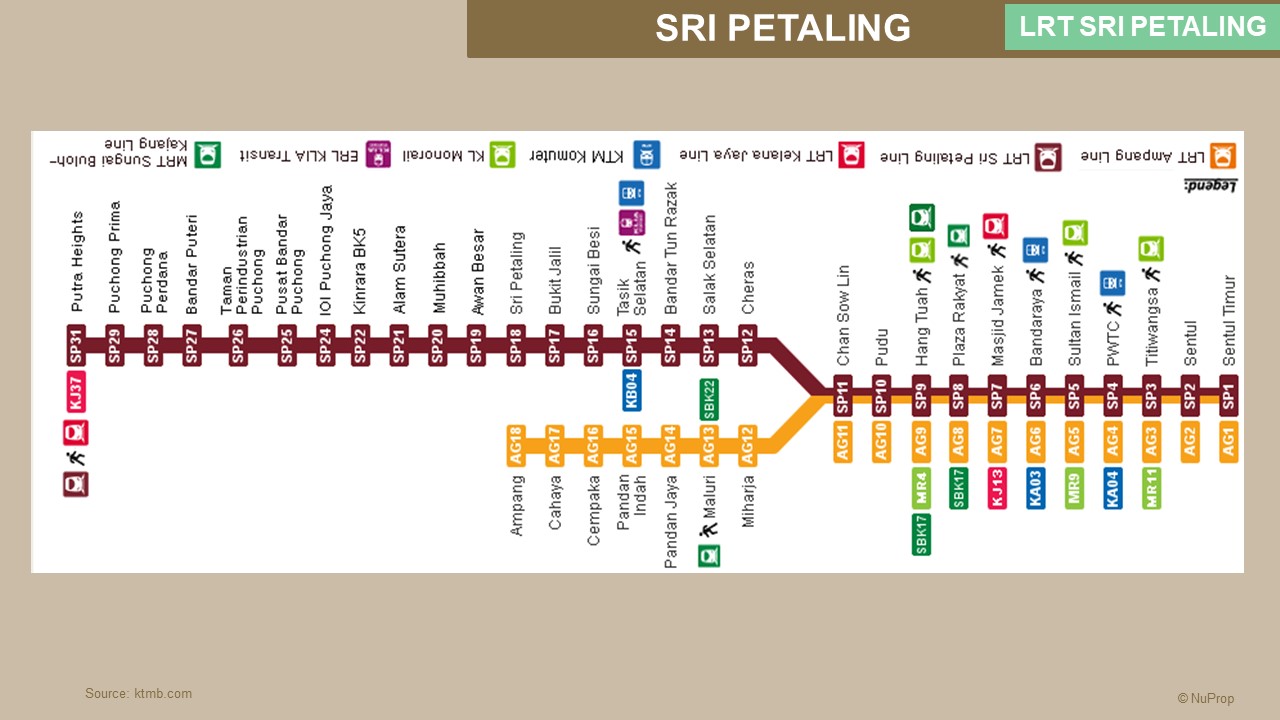 With the population numbers started shooting up, the wealthy amount of prominent amenities that have been established and have been continuing to do so for the past 5-10 years were developed. Sri Petaling LRT line which was opened in 1996, takes you to various destinations such as Bandar Tasik Selatan station where you can exchange into the KLIA Transit. Not forgetting, the Ampang LRT Line which can be accessed when you exchange at the Chan Sow Lin station. Furthermore, you will also be able to access the fast-paced train line, MRT when you get down at the Plaza Rakyat station & Masjid Jamek as an interchange station with LRT Kelana Jaya line connecting you to KL Sentral, Kuala Lumpur largest transit hub. 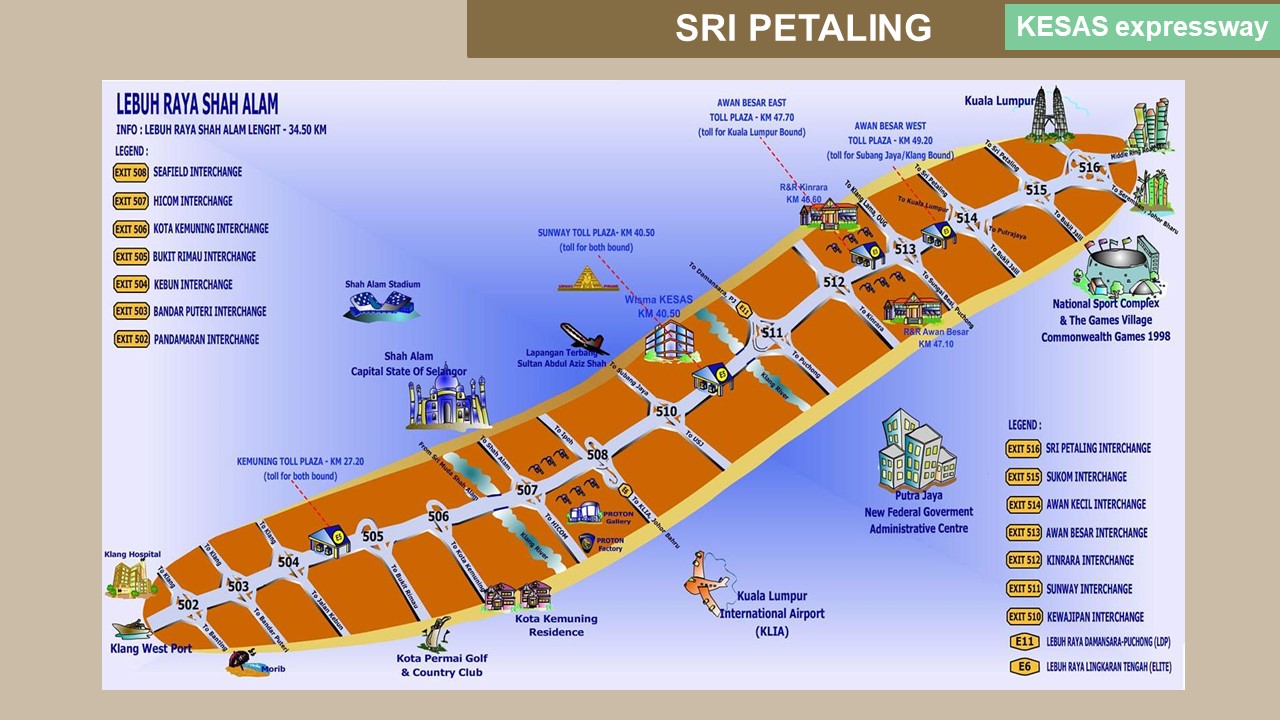 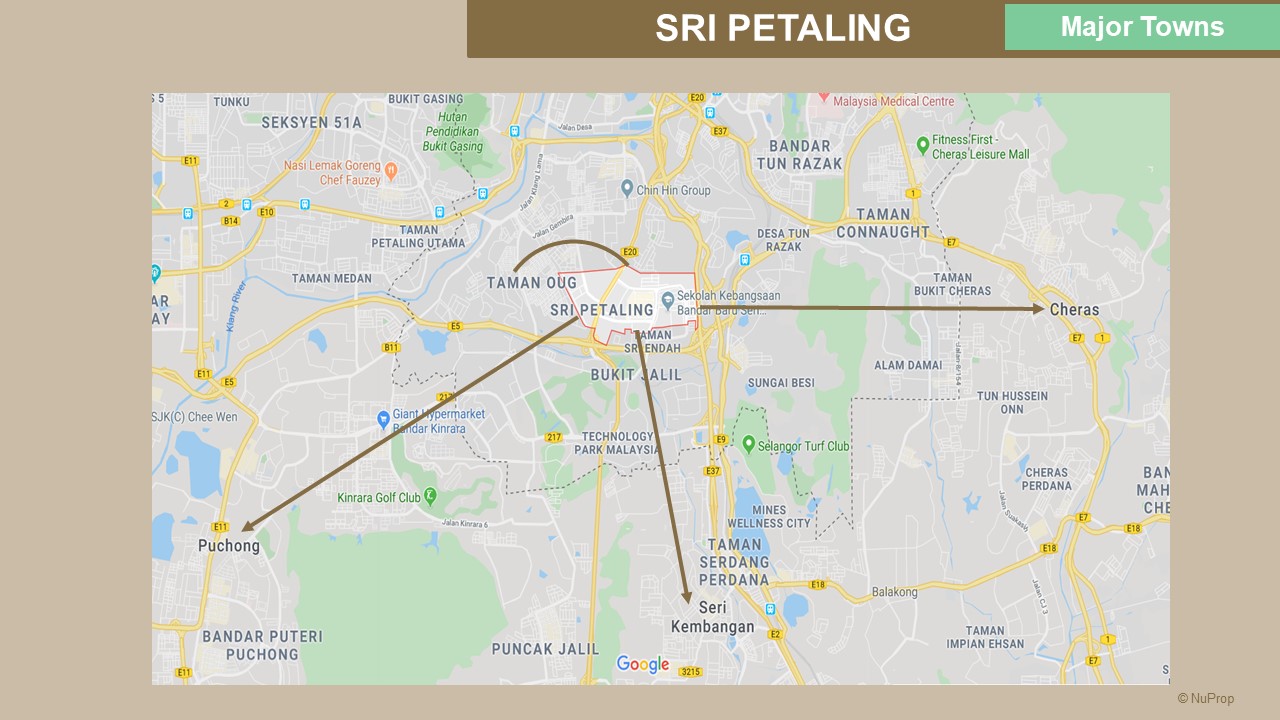 Many connections in terms of highways were made available for people to travel and live with ease, the major highways such as KL-Seremban Highway, KESAS, KL-Putrajaya Highway, Kuala Lumpur Middle Ring Road 2 and New Pantai Highway are connected to major towns and cities outside of Sri Petaling such as Puchong, where you can get an immense of newly developed properties and the same goes as well for the neighboring town of Cheras. For example, the KESAS Highway leads to various destinations such as KL City, KLIA and Subang Airport. 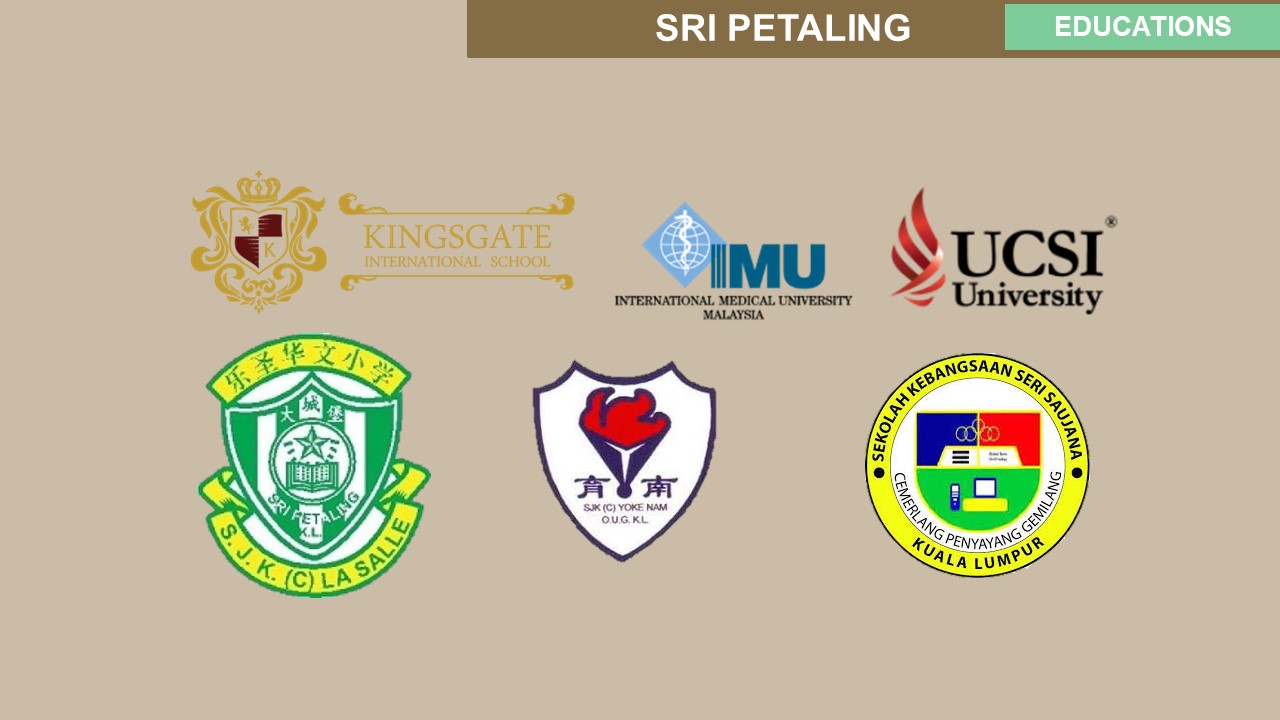 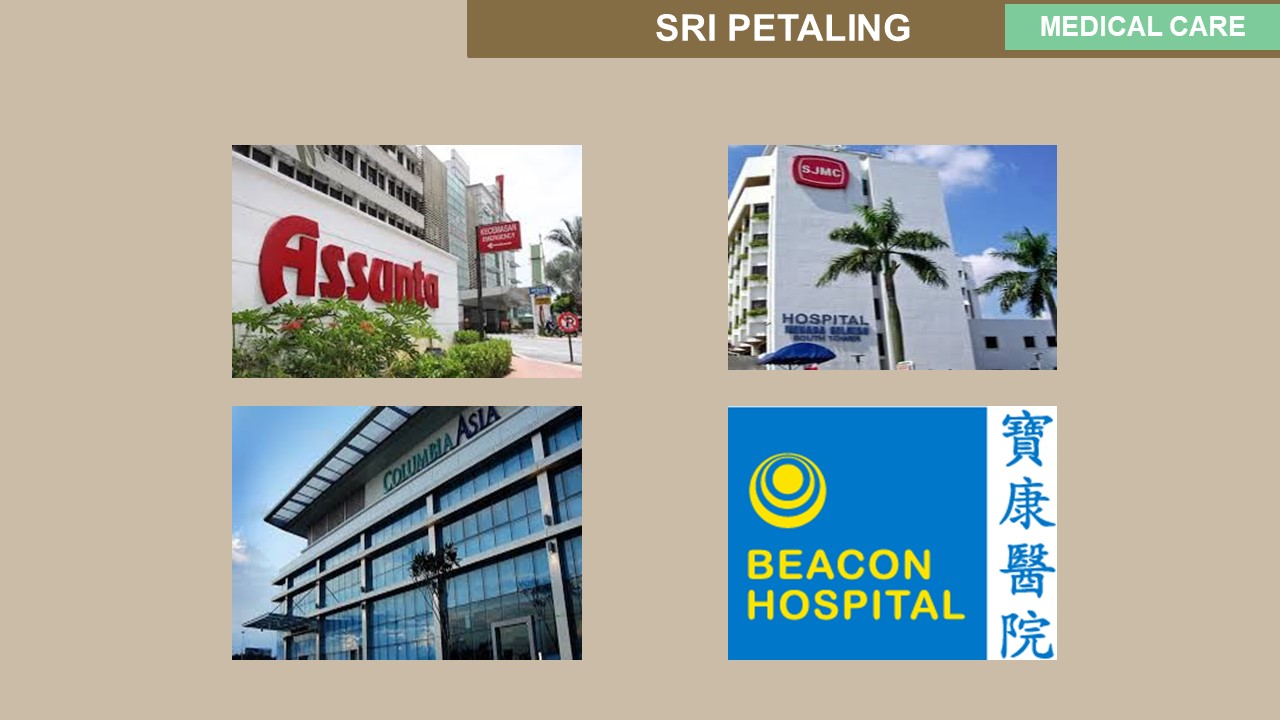 Residents of Sri Petaling are surrounded by medical centers from the nearby neighborhoods of Subang Jaya, Petaling Jaya, and Puchong. There are many renowned medical institutions such as Subang Jaya Medical Centre, Columbia Asia Hospital and Assunta Hospital has been there for many years to serve the residents. For the past 10 years, new medical institutions such as Beacon Hospital have been opened up where they specialize in treating cancer patients.

It is safe to say that, Sri Petaling is one of the most accessible places to live in whether you're a single working adult or a family person. This place is ready to offer you with all its wonderful hidden gems for you to utilize!