What is your first impression when you hear Kota Kemuning?

Well, Kota Kemuning might sound foreign to some, but it has now become one of the matured towns in the south of Shah Alam, while not to forget the emerging of new development ranging from property to connectivity. Kota Kemuning offers you the beauty of nature and a good living environment, filling the cup for most residents who chose to live there notwithstanding it was once a new township.

Kota Kemuning consists of residential, commercial and industrial land; known to be a mixed development with varieties of buildings type. The potential of Kota Kemuning has ignited the intensity of developers to proceed with property developments. You can find the developments in Kota Kemuning by discovering property sites on the net, and of course, for new developments you have NuProp!

Since NuProp helps you to discover new properties, let us disclose you the latest & new update about Kota Kemuning. Sit back and let's explore! 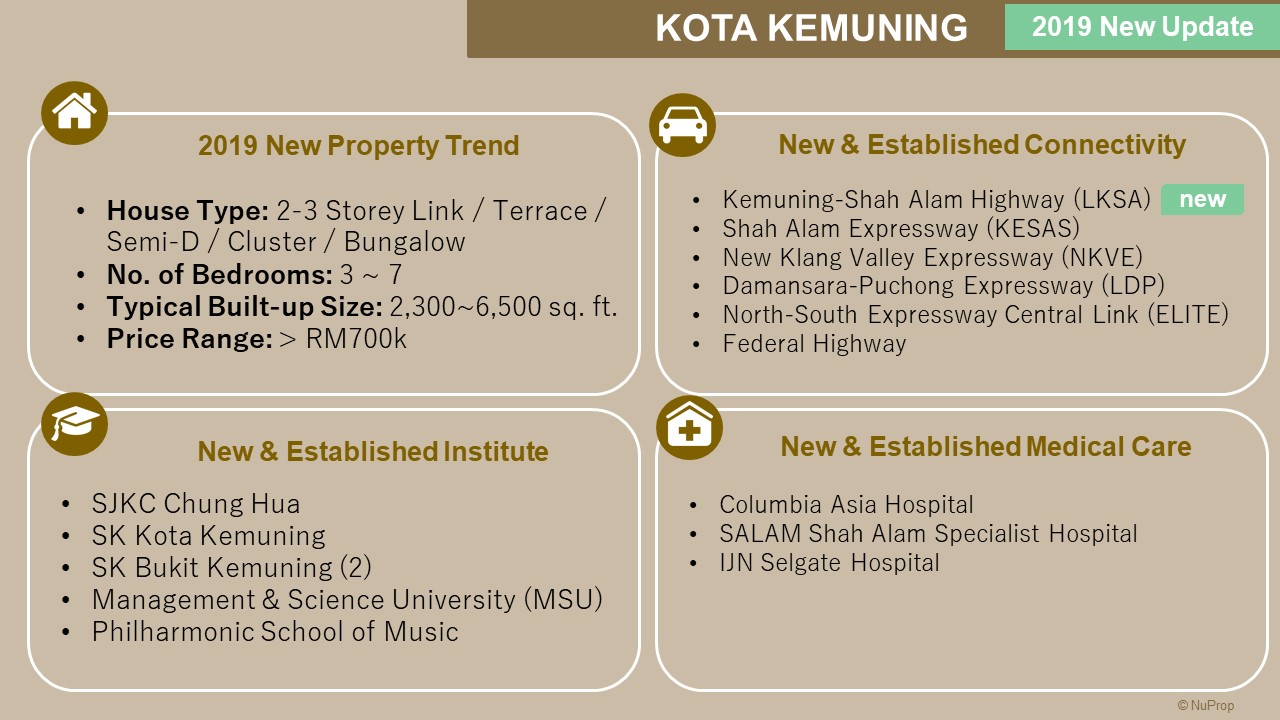 Living his life with two teenage daughters, a sporty son and a wife who loves gardening, Mr. Ong has decided to move to Kota Kemuning from his previous apartment in Puchong. Since Kota Kemuning offers spacious land, the sight of landed houses is prevalent to be seen there. Considering a vast land for his growing family, he is relishing his life by settling down in a 2-storey house.

2-3 story link house, terrace, semi-D, cluster, and bungalow are the typical houses type you can see in Kota Kemuning. The new properties are mostly landed houses ranging from 2,300 to 6,500 built-up size. The houses are all spacious judging from the typical number of bedrooms with minimum of 3 to 7. Since most of the new properties in Kota Kemuning are landed houses, the prices often start from RM700K, but let's not forget that high rise properties are starting to sprout as well. 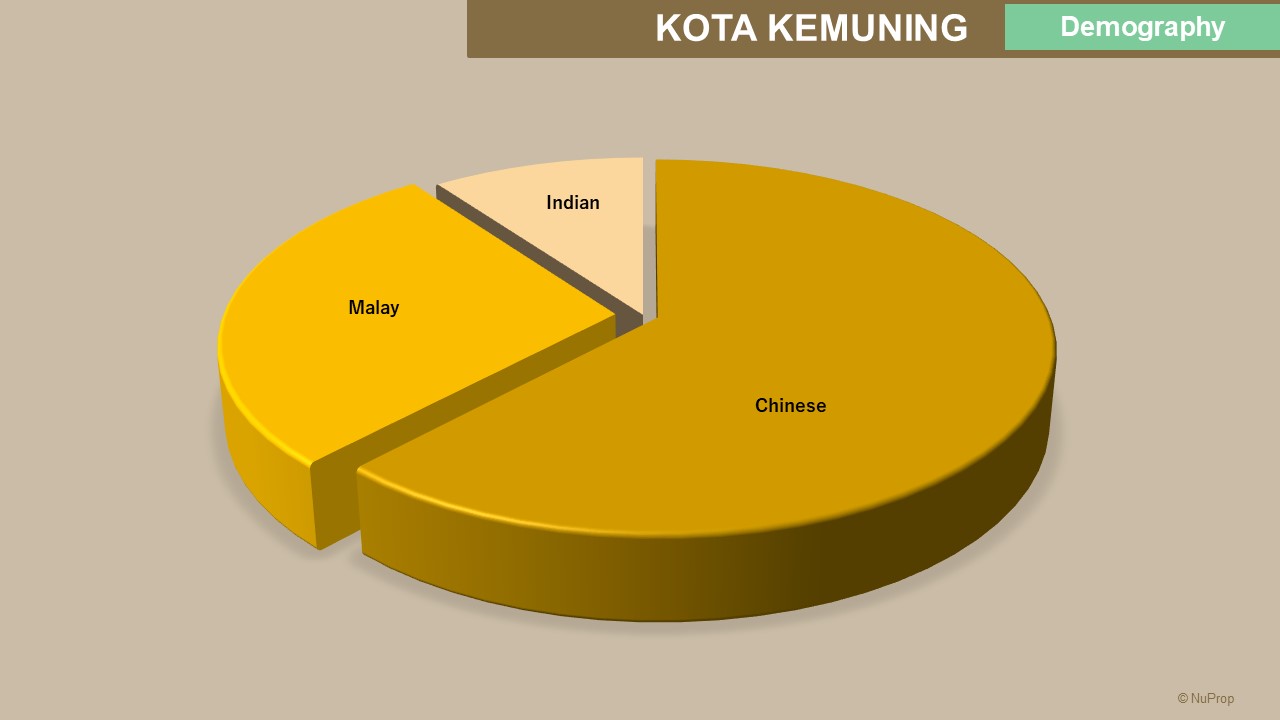 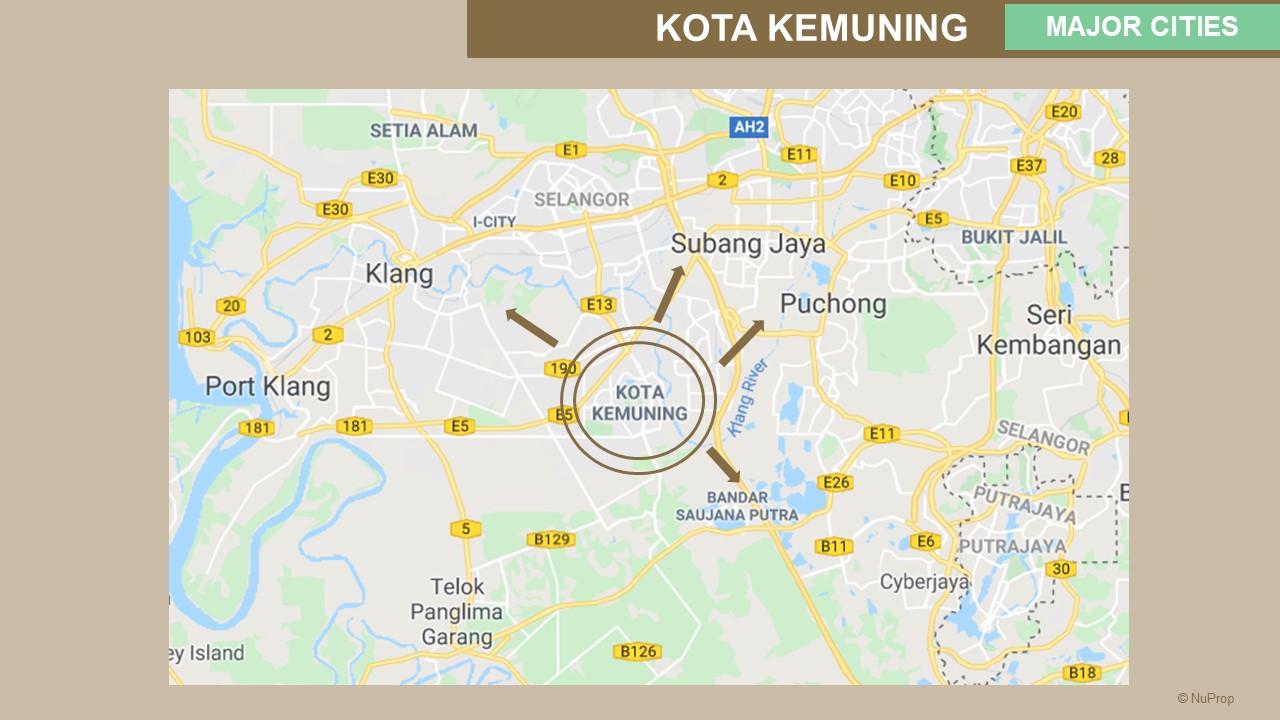 Kota Kemuning is located nearby major cities such as Subang Jaya, Puchong, Klang and a well-known township in the south of Putra Heights (Bandar Saujana Putra). People who work in these major cities have no problem residing in Kota Kemuning since it is connected to established highways. 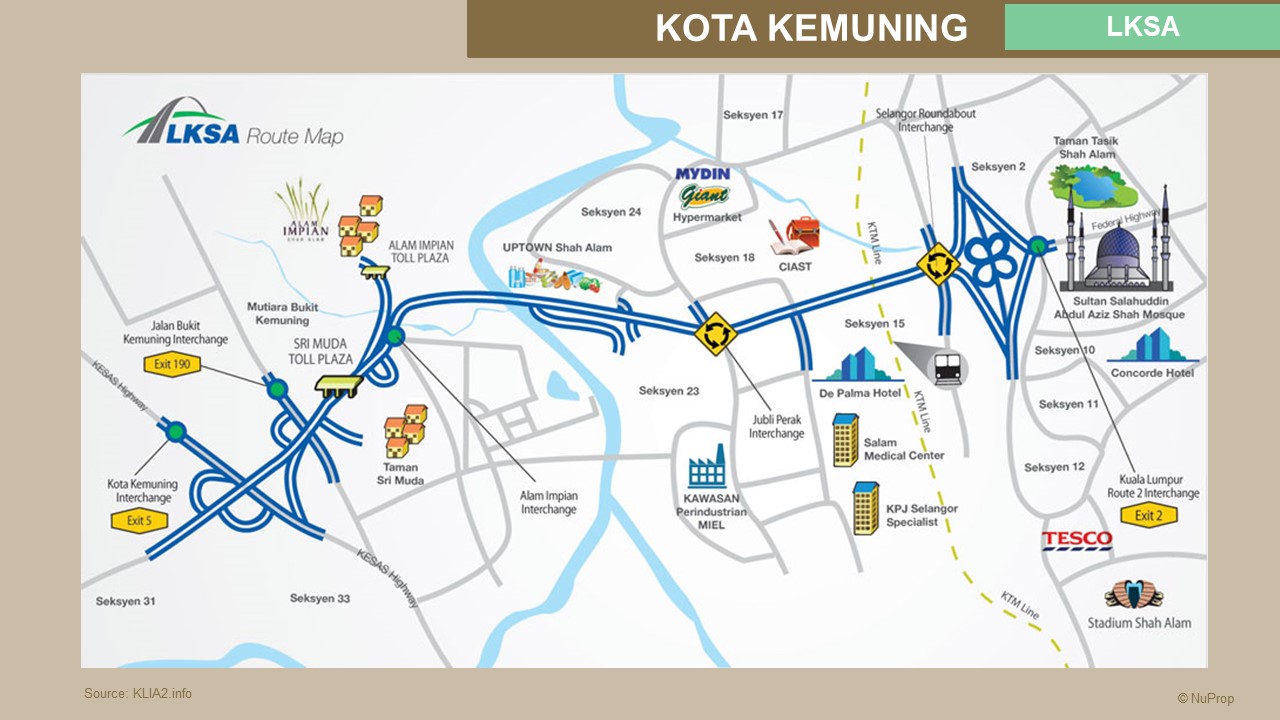 The new highway which connects Kemuning and Shah Alam known as LKSA has provide the fastest route to many destinations. Kota Kemuning is also situated along the KESAS highway between Subang Jaya and Klang, while being connected to major highways such as NKVE, LDP and ELITE highways to get to the city. 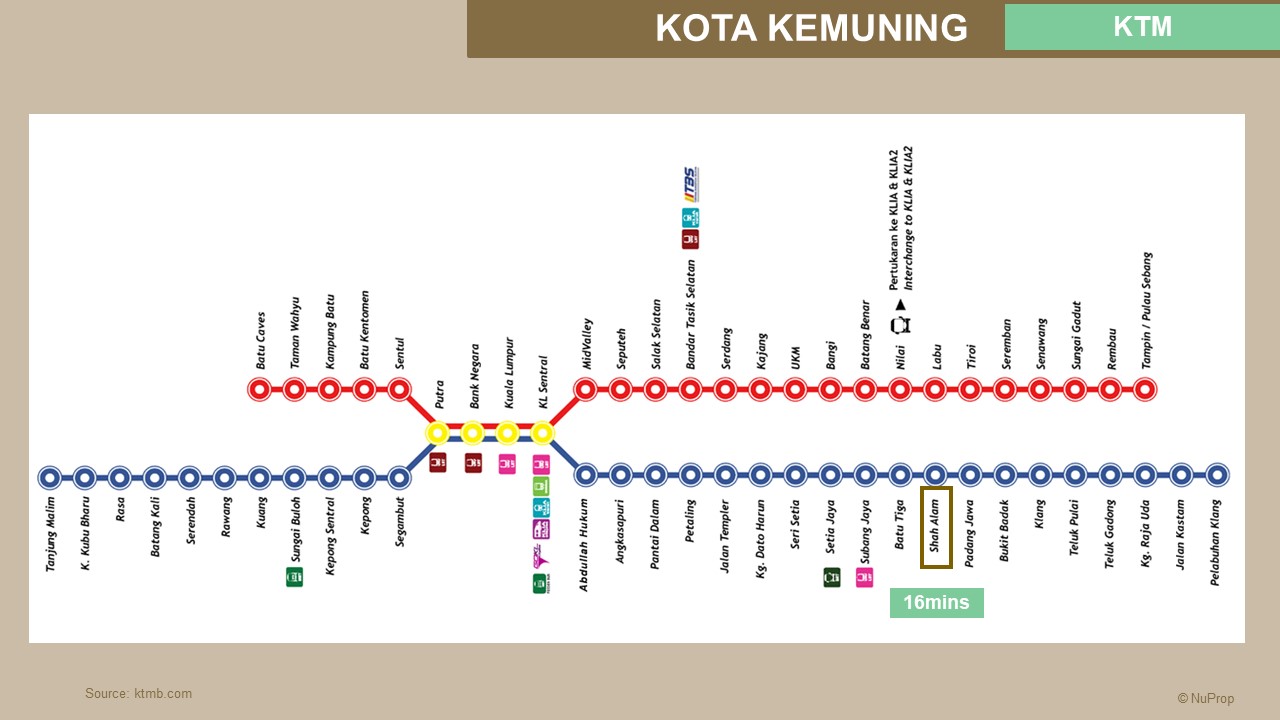 While talking about public transport, you can get to Kota Kemuning by taking a KTM to Pelabuhan Klang, and make a stop at KTM Shah Alam. Residents who work at KL City Center can opt for the 40 minutes distance commuting by train. 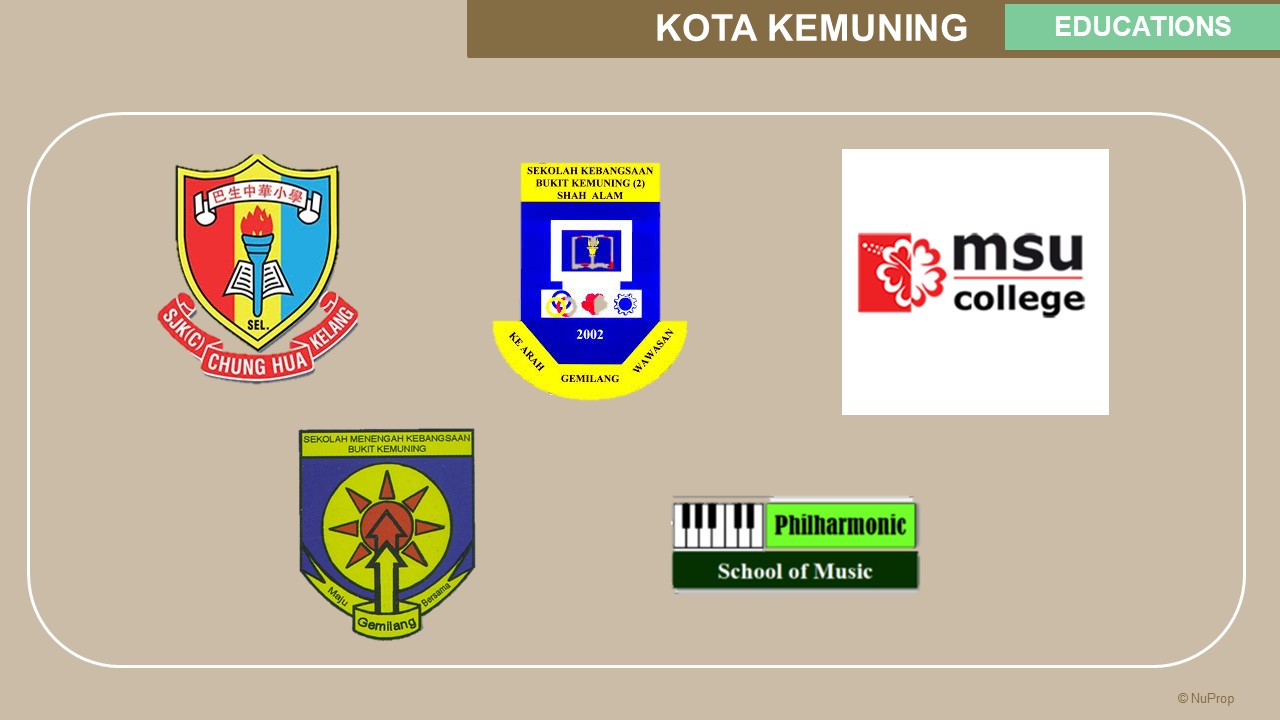 The mushrooming of this township includes some options for schools. For the children of Kota Kemuning residents, there are schools such as SJK(C) Chung Hua, SK Kota Kemuning, SK Bukit Kemuning (2), and SMK Bukit Kemuning. Not to forget the short driving distance to a private educational institutions, Management and Science University (MSU) and Philharmonic School of Music.

Columbia Asia Hospital is one of many hospitals and clinics the residents may easily reach from Kota Kemuning since it took only 10 minutes drive. There are also medical centers such as SALAM Shah Alam Specialist Hospital and IJN Selgate Hospital, taking the residents not more than 20 minutes to reach.

Kota Kemuning provides the essential factors for a family to live in with a lot of potentials to be unlocked. For that reason, top developers such as IJM and GAMUDA has moving southwards to build a new township situated adjacent to Kota Kemuning Shah Alam, known as Bandar Rimbayu. Click here to discover new properties in Kota Kemuning.